U11 tri-nation tournament in Luxembourg

From 12th & 13th May 2012 The Swiss U11 squad took 2 teams to compete in the the Under 11 invitation tri-national tournament at the Pierre Werner Oval Cricket Ground, at Walferdange in Luxembourg to play in a 4 way tournament with Luxembourg (the hosts) and Belgium, and came away victorious with the ‘A’ team finishing in a creditable third place.


The Swiss team opened against the unknown quantity Belgium and thanks to some steady batting from Captain Chris Langford who retired on 21, some excellent running between the wickets and a vast amount of extras, the innings finished on 126 for 3. Belgium were never in the chase after losing early wickets and finished on 62 for 5, Will Clayton and Ben Harris both taking 2 wickets each.

The second game saw the team take on the Swiss A team. Coach James Harper decided to reverse the batting order to ensure all the players got some time in the middle and the tactic worked well. Ben Harper scored 19, unluckily run out , and Luke Specogna scored 17, with the team finishing on 103 for 4. Swiss A were in terrible trouble with the score at 1 for 5 but managed a creditable 45 all out, Ben Harris taking 3 wickets, Will Clayton and Mustafa Hussein 2 wickets each.
With Luxembourg also winning their 2 games, this set up the tournament decider for Sunday. Switzerland won the toss and put Luxembourg in to bat and proceeded to bowl beautifully, removing the dangerous top order batsmen from the hosts cheaply. Luxembourg hung on to finish on 53 for 8, Mustafa Hussein and Umar Khayyam taking 2 wickets each. Chris Langford and Tom Bews lead the run chase and such was the maturity of their batting, comparisons to Strauss and Cook were being made by the large crowd. Runs flowed at a steady pace and Switzerland cruised along, Tom finishing with 19 not out and Chris with 15 not out for a 10 wicket victory.

Captain Chris Langford accepted the trophy on behalf of the team and also picked up the award for the best batsman having scored 36 runs in 2 innings and not being dismissed. Such was the strength of the Swiss bowling that each outfield player bowled 2 over each in every game. Ben Harris was the pick of the Swiss bowlers finishing with figures of 5 for 15 from 6 overs and was a little unlucky to miss out on the overall bowling award. A special mention also for Vikram Bannur who kept wicket beautifully and Callum Wright who took 4 good catches.

The Swiss A team, comprising mainly of Basel Dragons players, gained valuable experience and had a lot of fun over the weekend. The team started against Luxembourg and with Ishandeep Singh batting well, looked like posting a good score. However, once Ishandeep was out for 12, wickets were lost at regular intervals and the innings finished on 59 all out. This was never going to be enough and despite tight accurate bowling from Captain Morgan Scott, Ed Clayton and James West, Luxembourg achieved their target for the loss of 2 wickets.

Next up was the Swiss team and again, tight bowling from Morgan, Ed and James prevented runs being scored at a quick rate, James taking 2 valuable wickets to claim bragging rights with the senior team. With the Swiss team finishing on 103 for 4, there was a glimmer of hope for the A team but this soon went our when they were reduced to 1 for 5! Morgan, Ed and Tanmay Kasi held the lower order together and the team finished with a credible 45 runs.

With Belgium also losing their 2 games, the boys were up for a big effort in the final game on Sunday morning. Morgan won the toss and inserted Belgium who proceeded to bat very sensibly. However, once the opener had retired, the runs dried up and Switzerland A managed to keep the extras down to a reasonable level. Morgan and Ed once again bowled well but the star performer was James West who finished with 2 for 6 off 4 overs. With Belgium finishing on 78 for 2, the boys knew that they would have to step up the batting performance from the previous 2 games to prevail. This looked a tall order when both openers were dismissed cheaply but this brought to the wicket Ed ‘Geoffrey Boycott’ Clayton who refused to be dismissed and saw the team to victory, batting 15 overs for 7 runs. Captain Morgan also chipped in with 7 runs and thanks to a large extras total, Swiss A had the victory they so desired to finish the tournament in 3rd place.

The Swiss U11 can now look forward to their UK tour in August. 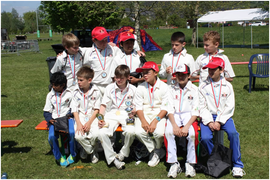 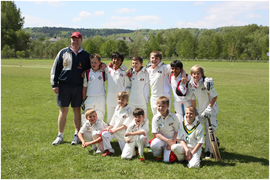 For further information on the tour to Luxembourg click here.